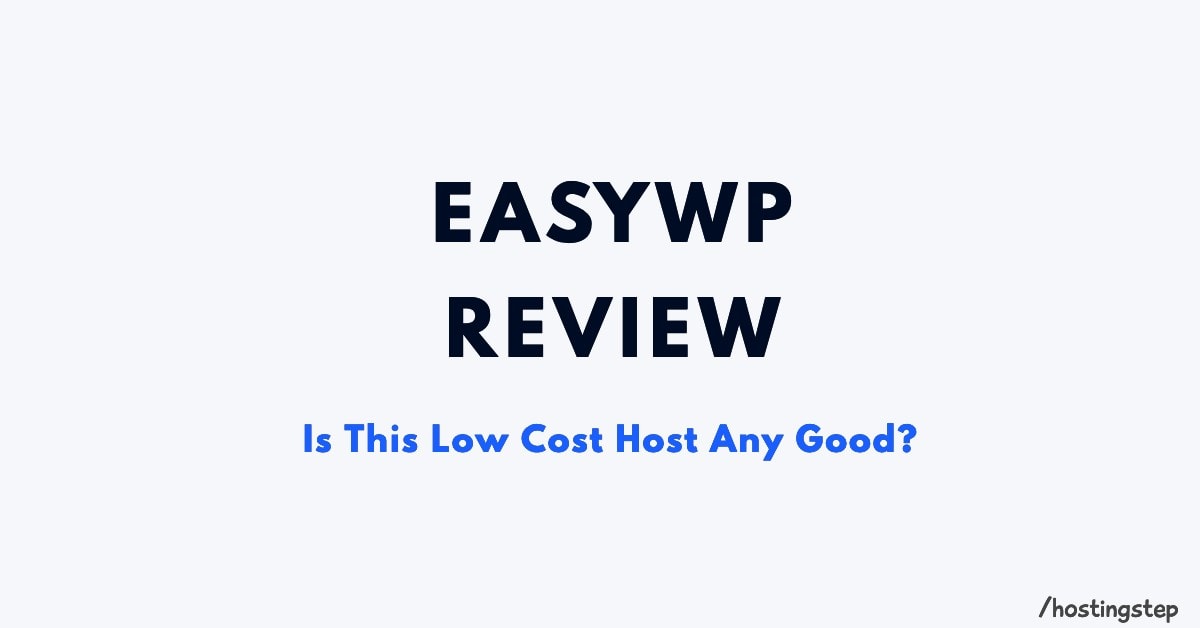 EasyWP is a managed WordPress hosting service that promises to make setting up and managing a WordPress site easy. In this EasyWP review, we'll look closely at the features EasyWP offers and see if it lives up to its promises.

In this EasyWP Review, I shared about

EasyWP announced a price increase on all their plans. Now, I'm thinking of canceling my subscription and stopping monitoring them.

I started tracking EasyWP from March 2021 to Sep 2022 (19 months) and paid around $162 as my monthly subscription cost for the Turbo plan.

Based on 19 months of data, here are my EasyWP Pros and Cons:

Overall suggestion: Apart from the above cons, there are several one-time issue happens frequently. I struggled a lot while configuring the domain name with their sub-domain and CDN configuration also caused a lot of pain (though I would like to appreciate the customer support here, they connected with me in 2 minutes and helped me on this)

I really respect NameCheap's motivation to build a low-cost Managed WordPress hosting service. However, the top players like Cloudways, WP Engine, or Kinsta don't have such cons. They offer free SSL & CDN, automated backups, better performance, and uptime. One can read my pros and cons before deciding whether to use EasyWP.

Cloudways: Get started at $10/month and host unlimited sites. The company offers 5x better performance than EasyWP. There is a three days free trial.

EasyWP is the Managed WordPress Hosting platform from NameCheap. EasyWP comes with easy to use interface, and their plans start from $6.88/per month to $19.88/per month.

A good hosting service should have high performance, and performance has many aspects. At Hostingstep.com, I did the highest number of performance tests on EasyWP.

I checked the server response time, often known as TTFB (Time to First Byte). I hosted a site on the EasyWP platform and monitored it using the Pingdom tool.

Based on 12 months' data, the EasyWP site averages 383 ms in the Server Response time test.

Are they faster? No.

There are nearly 7-10 hosts faster than EasyWP; you check those fastest hosting lists here. To give you an idea, I've compared this host's performance with other similar-priced hosts. Note that the lower the TTFB, the faster your performance is.

Next, I proceeded with the uptime check, and we are all pretty much aware of what a crucial factor uptime is.

I have constantly been testing my EasyWP site's uptime, and as per my last test report, my EasyWP had an uptime of 99.96%, which is quite average.

Again, I am comparing the uptime of similar-priced hosts here.

How far is EasyWP good at handling high traffic? To find out the answer, I performed load testing on my EasyWP by sending 1000 concurrent traffic to the site and monitoring the load-handling ability of the hosting service.

I have to be honest, and I wasn't impressed with the Load Testing results since it recorded 839 ms in the 1000 Clients in a 1-minute test. I wouldn't recommend anyone rely on EasyWP for sites that may have unexpected traffic spikes.

Many hosts like A2 Hosting and ChemiCloud are cheaply priced yet handle load tests better than EasyWP.

However, if you plan to use EasyWP with a target audience in multiple countries, it's not a good choice, as hosts like Cloudways at $10/month offer better TTFB across the globe.

User experience has become crucial for sites to rank higher on the SERP. However, before you can host a site on a hosting service and strive to offer your visitors a fantastic user experience, you must first find out how supportive the hosting service is. This is where the Core Web Vitals test comes into play.

As I tested the Core Web Vitals of my EasyWP site, it recorded a ‘Largest Contentful Paint' of 0.791s, a ‘Total Blocking Time' of 0.000s, and a ‘Cumulative Layout Shift' of 0. Going by the results, EasyWP undoubtedly has good Core Web Vitals, and sites hosted on EasyWP can offer an excellent user experience.

Setting up WordPress sites has never been this easy and quick, and it hardly takes 90 seconds to set up a WordPress site with EasyWP.

EasyWP includes a 1-click setup using which customers can create and launch a custom WordPress site in just 2 minutes without dealing with the cPanel technicalities.

Once installed, you can get the site login details from the dashboard and start publishing posts in minutes.

Pricing is undoubtedly another essential aspect to cover in this EasyWP review. If we consider the pricing, it is pretty reasonable and affordable. Customers can start for as low as $6.88; resources-wise, it offers a good value for money on all plans.

EasyWP plans (with their monthly visitors and monthly pricing):

A 30-Day Money Back Guarantee covers all the plans. But keep that in mind, the pricing is on a per-site basis, and you can't host another site in the same account.

Nothing works without good customer support these days, and the managed WordPress hosting certainly has one of the finest and quickest comprehensive 24×7 support with the NameCheap team through live chat at every stage.

The NameCheap support team comprises executives with deep knowledge of WordPress and other hosting technicalities. The support has largely proved this point over the years by their dedicated role in assisting the customers.

EasyWP offers customers a Free CDN on the Turbo and Supersonic plan. A free content delivery network would help users have their content delivered to their target audience in any world region at the best speeds by choosing the closest server location.

The company also offers Free PostiveSSL on its higher plans to add encryption, validation, and trustworthiness to your site.

You are wrong if you think EasyWP is the cheapest way to start a blog. While the starter plan is priced at $3.88/month, it doesn't include SSL & CDN. Considering you can buy the cheapest SSL from NameCheap for $5.88/year and use a free Cloudflare CDN, the total hosting cost will be around $4.37/month.

Is the pricing affordable? No. Many similar hosts like FastComet start from $2.95/month, with free SSL & CDN available monthly billing. Not only that, but FastComet also offers faster performance than EasyWP.

2. CDN works only with Namecheap Domains

I don't know whether it's a beta stage limitation; you can't use Namecheap CDN when your domains are hosted elsewhere.

EasyWP feels like it is in beta. For example, I started using them on June 21st, but the backups haven't been generated even after ten days, and it seems the backups need to be generated manually.

It's a tradition that Managed WordPress hosting companies restrict a set of plugins, but NameCheap EasyWP has a long list of banned plugins.

While the EasyWP performance is similar to NameCheap's shared host, you can use their shared host and use any plugins of your own choice.

But the platform has several limitations, which are essential for production sites. Like, there are no automatic backups. Almost 99% of host offers free daily and weekly backups but at EasyWP is just manual backups.

NameCheap advertises its plan as low-cost managed WordPress hosting. But in reality, EasyWP's starter plan has high limitations, and many upsells are involved.

The supersonic plan promises to handle 500,000 visits per month at just $11.88/month, which is excellent, considering no shared host can handle such traffic.

At the same time, Cloudways DigitalOcean plan of $10/month can handle similar traffic, and what's more, you even host an unlimited number of sites in the same plan.

I tried EasyWP first in 2019 & again in 2020 and 2021. There were improvements, and let's see how EasyWP grows in the coming months. However, I can't recommend them for serious business as they lack the essential features called “Managed WordPress Hosting.” Even considering the cost, there are better alternatives you can put your trust in.

FastComet: Get started for $3.45/month and just pay monthly; no upfront billing is required. FastComet offers a faster response time and handles load better than EasyWP. You will also get automatic backups and restore. There is also free SSL and CDN included in the basic plan.

Cloudways: At $10/month, you can host unlimited sites, and it comes with no traffic limits. Cloudways user interface is similar to EasyWP yet advanced as Cloudways was first launched in 2011 and has become a stable product compared to EasyWP, which got founded in 2018. Use code “BIO25” to get 25% OFF on the first billing.

ChemiCloud: At $2.76/month (36 months billing), you can host a single website and get a free domain for a lifetime. They will renew your domains for free if you keep hosting with them.

EasyWP Review 2023: Decent Performance But Not the Best 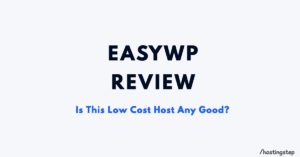 Here is my super in-depth review of EasyWP. In this EasyWP Review of 2023, you'll learn about EasyWP performance, support and pricing in detail.